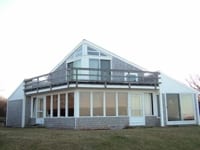 The Oberteuffer house was completed in 1941. Contracts were let in 1939 and the grading began in 1940. The grading and draining of the lot were done by Eddie Elnathan Eldredge of Chatham, and little Teddy Oberteuffer rode on the bulldozer. The design of the house was done by a professor of architecture at Ohio State University, Gilbert Coddington. Gilbert had never seen the ocean but was able to work from photographs of the site and the intended view and produced the design that is largely unchanged over the ensuing 70 years. It is interesting to note that when the house was originally sited on the lot the main supporting beam was pointed directly at the opening between the point and North Beach. Coddington’s fee for the design work was a week in the house for himself and his family, which he finally collected in about 1946.

The carpenter on the job was Stanley Crosby. Del Oberteuffer once saw Stanley setting up a table saw for a complex cut and said it looked complicated. Stanley replied, “Ain’t cut a right angle since I been on the job.” Alvin Fulcher, the wonderfully profane blacksmith from Eastham was asked to make andirons for the fireplace in the living room. When he was told that the fireplace was five feet high he said “well Je— Ch—- why don’t you wall it off and call it a bedroom?”