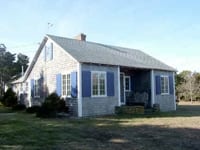 “Windward” was built in 1916 to 1917 and completed for occupancy in the summer of 1918.  Source for the history of the cottage was Constance Tenney who was 11 years old in 1918 and my father, Captain Joseph F. Tenney, USN (Retired), who was eight years old at the time.  When the cottage was completed there was only one cottage to the north owned by Richardson (MS. Marvel rented the cottage), now owned by the Calderwood family.

To the south were eight cottages and the old camp: