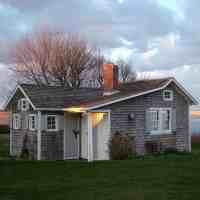 Overlooking the Atlantic ocean, sandy beaches, and the ancient Nauset Marshes is a group of weathered grey buildings that have remained largely unchanged for 80 years. Although they originally only deserved the description of “duck shacks” they now have all modern amenities except that some are still partially supported upon locust posts. Mansions have grown up around them but their 180-degree view of the sea from a 50-foot high bluff is equal to any of those. The morning sunrises from the shining water to light their faces and the golden evening sunset spreads out over the lawn. They are in a spectacular setting.

In later summers, Marcia, an artist, continued her illustration trade there in the The Studio. This too had a dirt floor but had large North facing windows – ideal for painting. Piece by piece other buildings arose and were modified to accommodate changes. The Howe girls played with their local friends during the World War II years, then went to school, got married and brought their families down in the 1950’s.

When there were house repairs that needed a team, both families pooled resources shingling, painting trim, cutting hedges, or lawns. It became an effective team.

The Johnson boys went off to school and the Tuckers acquired boats of different kinds for scooting across the inlet or catching big Bass. The boys also joined with others to form a house painting company that lasted several years.

Marcia somehow managed through all this with aplomb, contributing graciously even though her arthritis was clearly paining especially in the damp winter months. She was one of the few year-round residents to brave the long winters on the Heights. When she longed for a Print Studio to expand her talents we enlarged the garage building and put in a press, proper lights, and ink shelves. It was a short walk to get to, but still a chore to reach in the winter. 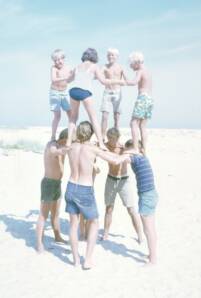 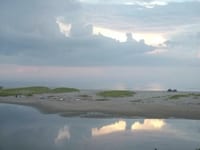 In the 1980s all the now more adult family members used the three cottages in summer months according to an alternating reservation calendar; Johnson’s one month, Tucker’s the next month. By then there were more accommodations than needed, the utilities were very advanced with stoves, washers, driers, plenty of hot water, propane and oil heats, several TV’s, phones and internet service. We had a list of plumbers electricians and landscapers on duty to keep everything working well.

In the 1990s the next young generation was forming; Dave Johnson and his wife Robin brought David, Cris, and Lauren down. Jennifer Tucker and her husband Tom later brought their son Sam. It is too early to guess if Nauset will have the same excitement for them partly because of how the world has changed. Back then, a freshly caught sand dab was both a sport and a treat to enjoy for breakfast. A beach bonfire was a thrill, throwing a dog stick into the surf was great fun. Can’t do that now.Water_ky_reflextion_for_Tucker_Studio_page_200x150_ICON.jpg

But regardless of anything else that happens, the Bluff at Nauset not only is an indelible part of our collective family memories, it is an exquisite , timeless location that we must at least offer intact to our family generations yet unknown.