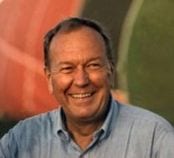 John Joseph Tropsa, 83, of East Orleans, Massachusetts died Sunday, February 12, 2012, with his family at his side, after several years of battling a rare progressive disease.

He was a retired executive of the Micro Switch Division of Honeywell. Born in Stamford, Connecticut, March 28, 1928, the son of the late John Frank and Gertrude Tropsa. He was predeceased by three siblings, Louis F. Macsata, Alberta W. Macsata, and Helen E. Marko.