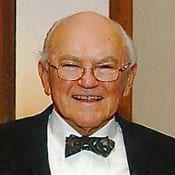 Carlyle Fuller “Hap” Barnes, 87, of Bristol passed away peacefully on Saturday, January 21, 2012, after a long battle with Type 1 Diabetes. As a 10th generation descendent of the Barnes clan in Bristol, he was the son of Fuller Forbes Barnes and Myrtle Aurelia Ives. He leaves behind his cherished wife of 62 years, Elizabeth “Betty” Anne May.

Hap attended The Loomis School and graduated from Wesleyan University in 1948 with an A.B. Degree. At Wesleyan, he was a captain of the fencing team and was a member of the Psi Upsilon Fraternity. He received an honorary Doctor of Laws Degree from Trinity College in 1977.