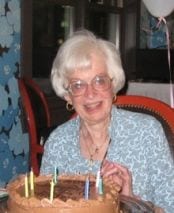 Mary Williamson, 94, a resident of Middlebury, Vermont since 1988 and a homeowner in East Orleans since 1963, passed away early on the morning of April 10th, 2013 at Porter Hospital in Middlebury after a short bout with pneumonia.

Mary was born in Jacksonville, FL on September 27th, 1918, the only child of Burdett and Jesse (Rich) Arms. She was raised in Farmington, Maine. In 1940 she graduated from the University of Vermont where she was an active member of the Pi Beta Phi sorority. After college, she moved to Boston where she attended Burdett Business school. During WWII she worked for Burdett finding jobs for their graduates, then for General Radio as secretary to the President, and entertaining at the USO club. After the war General Radio moved her to NYC where she was the office manager. In 1955 she married Farrand Williamson and settled in New Jersey.