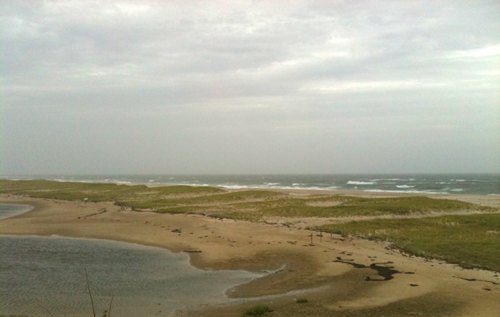 Hurricane Irene, downgraded to a tropical storm as of 9am this morning, is passing through Western Massachusetts and leaving much of the Cape with some increased wind and no rain. While the storm isn’t finished, it’s clearly on its way out, and damage to the Orleans area should be minimal. This news post will be updated if the situation changes.

[Update Sun 11:40am] Power out for all of Nauset Heights, possibly due to a downed power line on Tonset Road Extension off of Main Street. It caused a small fire on the side of the road, and police and firefighters were called in.

[Update Sun 8:45pm] Winds are sustained at about 40mph and peaking at 54mph on the Bluff. Many tree branches, one large enough to block main street, fell today. Be very careful if you are out of your house today. Tomorrow (Monday) promises to be a calmer day.

[Update Mon 9:45pm] Electricity has returned to Nauset Heights. The outage lasted about one and a half days.