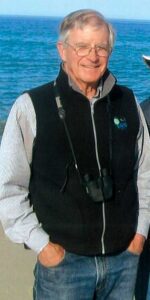 Dr. George L. Robb, 74, died unexpectedly from cardiac arrest on October 19, 2009.  A beloved pediatrician for 37 years, Dr. Robb graduated from Mt. Hermon in 1953, Harvard in 1957, and Harvard Medical School in 1961.  After an internship at Children’s Hospital in Boston, he served as Captain in the U.S. Army at Fort Bragg from 1962 – 1964. He then settled in Westwood and began his pediatric practice in Dedham.

George was passionate about sailing and spent many vacations cruising with his family. He also loved music and sang in the Harvard Glee Club, Dedham Choral Society, and the Chatham Chorale.  He played piano, guitar, ukulele, bagpipes, and the banjo.