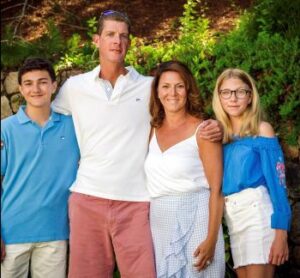 Frank Desider Csongor, known as Desi to his friends and family, was born March 10th, 1973 in Burlington, MA to Frank and Carol Csongor. He was welcomed into a loving family with siblings Susanne, Diana, Richard and Catherine. He will be forever their baby brother and “the prince”. He was loved and spoiled immensely by his older sisters. His Father, Frank Csongor, came from Hungary as a result of the Hungarian Revolution. Desi adored his Father and all the stories he told. Frank & Carol Csongor showered everyone with love and Desi especially appreciated his Parents constant support, advice and unwavering love. His home was always the hub of all holidays and family celebrations, and he looked forward to those times and spending time with his extended family and friends. Everyone was always welcome!

Desi moved to Hamilton, MA where he went to Elementary, Middle School and High School. He met friends he would have for life, many of those friends turned into roommates while Desi lived in Charlestown, MA post college. Those times in high school and the “Boston Years” created memories that those friends share and laugh about to this day. He enjoyed taking kung fu as a kid and playing basketball in high school and then running on the Charles River in Boston. He especially loved playing the guitar. He loved music and the memories that music provoked. He could learn a song on his guitar by listening to the chords and light up a room by singing and playing that song.

Desi attended Roger Williams University and graduated in 1996. Desi’s drive above and beyond any academic grade given will always be his lesson left behind. That drive and the business sense inherited from his Dad gave him the confidence to start Flagship Merchant Services in 2001 with Michael Gerstein, also from Hamilton, MA. Starting with just 2 employees they grew the company to be the number one merchant sales office in the United States. Desi’s marketing acumen was unmatched, and his negotiating skills were respected by heads of multinational Fortune 100 companies.

Desi met his wife Lauren Lombardi Csongor in 1997 and they married in 2002. Desi’s biggest joy will forever be their children Bretton and Gabrielle. His face lit up when he spoke about their personalities and their accomplishments. He loved spending time with his family in his favorite place Cape Cod, so much so that he moved his family from their home in Andover, MA to their beloved beach community, Orleans, MA in 2016. You could often find him fishing, boating, catching some sun in his “Big Daddy” beach chair and cruising in his beloved Defender down the beach while listening to Neil Young and Grateful Dead. His memory will always be kept alive and cherished while sitting on Nauset Beach, Orleans and listening to the lyrics to Donovan’s “Catch the Wind”.

Desi was preceded in death by his beloved Father, Frank Csongor. He leaves behind his wife, Lauren, their beautiful children Bretton and Gabrielle, his mother Carol as well as his sisters Susanne Csongor, Diana Butler and his niece Kaitlyn, sister Catherine Gauthier and her husband Edward Gauthier as well as his brother Richard Csongor, his wife Heather Csongor and their children Meaghan and Nicholas Csongor. He will also be forever missed by his sister-in-law Marisa Pacileo and her husband Anthony Pacileo and their children Emma and Ryan Pacileo as well as his sister-in-law Morgan Gass and his mother-in-law Susan Gass and father-in-law John Lombardi Jr. and wife Judy Lombardi. We will all be forever grateful for the love he gave and the beautiful memories we made.

Desi will be remembered by his family and friends as a good natured, gentle giant, a sensitive soul who possessed a playful, mischievous sense of humor. He will be forever missed and loved by all the lives he touched. His infectious laugh will live in our hearts and souls forever. Desi may your spirit take flight as you soar with the angels. Until we meet again.

A Celebration of Desi’s Life will be held on June 19th at the Wequassett Resort and Gold Club, Harwich, MA. Join his family and friends in celebrating Desi and his beautiful life. Further details to follow.