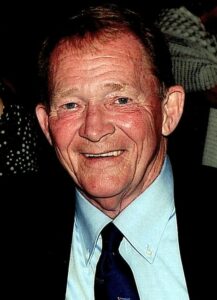 Pete was born December 30, 1941 to the late Frederic and Frances (Newbury) Andersen, and was raised in Cranford, NJ with his sisters Stephanie and Karen. When Pete was a child, his favorite activities were sports, by the time he reached high school he had singled out hockey, football and baseball as his true passions. In his senior year, his football team won the state championship with Pete as their “courageous quarterback.” Pete continued his education on a football scholarship at Hobart College and went on to graduate from Parsons College where he was elected vice president of the class.

1964 signaled the beginning of Pete’s career at IBM in Poughkeepsie, NJ. That year he also married the love of his life, Sally, and soon after they moved to Warwick, NY where he enjoyed training and hunting with their two golden retrievers. In 1969 Pete and Sally’s son, Guy, was born — the first child and first grandchild on both sides of the family. After serving in IBM Sales Training in White Plains, NY, Pete went on to become a marketing manager in New Haven and Hartford, CT.

In 1971, Pete and Sally moved to a home built in 1710 in Essex, CT where his love of all things antique began and where they lived for 27 years. A year later, Pete and Sally became the proud parents of their second son, Todd. At the same time, the family fell in love with Orleans, MA. In 1972 they purchased on Nauset Heights and began building a home in 1976. In 1977 Pete’s family built a home next door, bringing the family closer together once again.

As the boys got older, Pete’s favorite pastime became coaching their baseball and football teams. The family was also very active in tennis, often playing “youth and skill versus old age and treachery”. Pete always felt that team sports helped growing children with lessons in cooperation, focusing on team success rather than individual achievements.

When Pete was 51 years old, he was diagnosed with stomach cancer. Because of his excellent fitness, he was able to manage the many rounds of chemotherapy and radiation and beat the cancer. Following treatment, Pete had to readjust his role at IBM and ultimately decided to leave the corporate world and move to Cape Cod full time. In Orleans Pete and Sally enjoyed a wonderful, rich life together, full of friends, fishing, boating, clamming, beach time and many memorable family adventures. To keep himself busy Pete worked at Ocean Edge Resort where he helped manage the golf operations.

Pete’s health deteriorated in January 2020 with both pneumonia and mononucleosis. Shortly after he was diagnosed with a malignancy on his pancreas. Always the fighter, Pete underwent a successful operation for pancreatic cancer. However, his body was tired from years of health issues, and Pete died 11 days before his 55th wedding anniversary. He will be truly missed by all who knew him.

Pete is survived by his loving wife, Sally Tauchert Andersen, his devoted son, Guy, and his wife Bimala, and his devoted son, Todd. Cherished grandfather of Luke and Nathan. He is also survived by his sisters Karen Andersen and Stephanie Taylor and her husband Scott, as well as nieces, nephews and cousins. Fond memories and expressions of sympathy may be shared at www.nickersonfunerals.com for the Andersen family.