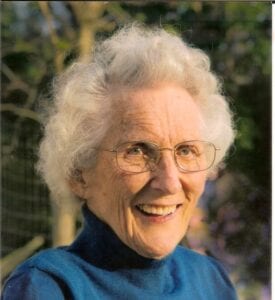 Elizabeth “Betty” Cullen, 92, died peacefully at home on Nov. 5, 2014. She was surrounded by the love of her family, friends, and support from Visiting Angels and VNA Hospice.

Betty was born in Hartford, Conn., on July 18, 1922, to Marion and George Keller. She grew up in California with her older brother Bill, graduating from Cornell University in 1943 with a degree in psychology.

Betty enlisted in the WAVES, joining a family tradition of serving in the Navy. As an officer, she managed a group of enlisted women who broke communication codes to help the Allies during World War II.

Betty later worked for the State Department and the Convention Bureau of San Francisco before meeting her husband, Jack, in an elevator in New York City. Betty and Jack were married in 1953 and raised their two children in Demarest, N.J.

She was very involved in a number of community activities including scout leader, PTA, and library volunteer. Betty and Jack retired to East Orleans where she again volunteered for the local library. She was predeceased by her husband of 52 years and is survived by her son Michael of Brewster, her daughter Patty of Westfield, as well as seven nieces and nephews and her dog Nauset.

Betty will be remembered for her optimistic and caring personality, patriotism, pride in her service to her country, and love of nature, reading, dogs, family, and friends.

Betty’s family is grateful to all her friends, caregivers, and those who cared for her and her house, allowing her to be able to live comfortably looking over the Mill Pond.

Rather than sending flowers, consider a donation to help others, enjoying the beach, a beautiful sunset, or a visit with an old friend.